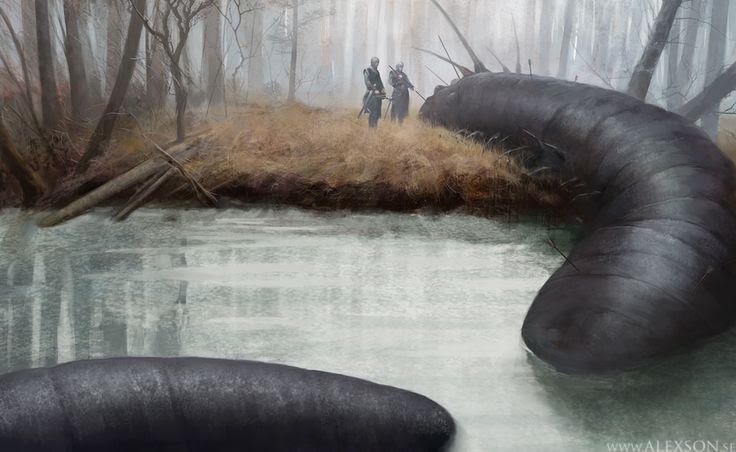 “Looks dead to me. Why else would it just be laying there?”

The it in question was an enormous black wyrm. Two thirds of it was partially submerged in the lake. The rest, the part with the dozens of small chitinous legs as long as a man’s arm, was laid out on the bank. Most drooped limply at the wyrm’s side, but a few stuck up at odd angles.

Tobin and Rorke had discovered it while on patrol. Thankfully they’d seen it from a distance and only gotten closer once they’d watched for a while, to make sure it wasn’t moving. Stumbling upon it up close without warning might have scared one or both of them to death.

Tobin took a step closer to the motionless wyrm, hand on the pommel of his sword as it rested in its scabbard. “Who do you think killed it, then?”

There was plenty evidence of the fight – a great many arrows and broken spears peppered the wyrm’s leathery black hide. But whatever happened hadn’t been by the lake. The grass was undisturbed, even around the creature itself. And surely, whoever brought down a creature like this one would have wanted to take some part of it as a trophy.

“Dunno.” Rorke was keeping his distance, crossbow loaded and at the ready. He looked as if he expected the wyrm to spring to life at any moment. “There’s a river that feeds the lake,” he pointed out. “Who knows where it goes? Anyone between here and where it starts could’ve had a go at this thing.”

“Looks like it took some doing,” Tobin mused. He reached out and took hold of a spear. The haft was made from a wood so dark as to be black, the end capped with what looked to be silver. Slightly raised carvings wound around it like very long, thin snakes. The weapon was slick and wet in his grip, as if it had only come out of the water a short time ago. The harder he gripped the more it seemed to want to squirm out of his grasp. He even imagined he could feel the carved snakes writhing under his fingers. It made the hair on his arm stand on end.

“Good thing we’ve got one nearby, eh?” Tobin chuckled, as if the sentiment were a joke, but in truth it was a reassuring thought.

Halfhearted chuckle dying out as a clearing of his throat, Tobin returned his attention to the spear. “Ever seen anything like this? Seems pretty fancy to go sticking in monsters, you ask me.”

“Must’ve been made for someone special. King’s guard, maybe?”

“Gods,” Tobin considered the idea. “You think it tried to eat a king?”

“Around here, who knows?” Rorke shrugged. “What I hear about these people, it wouldn’t surprise me if they hunted something like this for fun. Crazy bastards.”

“Yeah, well, whoever it belonged to it’s mine now.”

“Is that so?” Rorke arched a curious eyebrow.

“Yup. It’s a souvenir of war. We’ll have to report this thing, you know. And then what? The officer’s will be all over it. You think they won’t pluck these out for themselves?”

Set in his task, Tobin grasped the spear with both hands and pulled. There was a slight sucking noise, and the spear moved ever so slightly. “Ugh,” he grunted. “It’s stuck in good.” He planted his feet and strained. Though the wood felt like it would slip away he gripped it tightly, and with a wet noise the point pulled free.

The end was longer than Tobin had expected, a short broad blade in and of itself, serrated and etched with strange symbols that dripped black ichor. He whistled softly. “Fancy.”

The wyrm moved, and both men jumped back in surprise. The creatures’s chitinous legs spasmed, curled closed to the body, then stretched slowly outward again. A dozen eyes, once nothing more than slightly raised bumps at the creature’s front, snapped open. Red globes with red pupils, they looked in all directions at once before dividing their attention between the two men.

Rorke raised his crossbow, aiming for one of the eyes. “Back up nice and easy,” he ordered. “Move slow and it might not try to eat us.”

Tobin nodded and raised the spear defensively. The wyrm’s baleful red eyes, attention once split, focused exclusively on the spear. A deep rumble escaped from the depths of the wyrm, reminding Tobin unpleasantly of a glutton at a feast who was belching to make room for more.

Like an enormous snake the front of it lifted from the bank, slowly and menacingly arching to tower over the two men. “Begadon’s Spear,” the wyrm rumbled, speaking without any apparent need to move its mouth. In fact, it sounded as if the words were coming from deep within the creature’s innards. Even so, it was clear who it addressed.

“You removed it,” the wyrm rumbled. The parts of it still in the water moved sinuously just beneath the surface. “Ah, freedom. I had not thought to awaken after that cursed, troublesome man lanced me with it. He and his damnable magic. I savored the crushing of his bones as my last act, certain his followers would finish what he had begun. And yet… you are not they.”

“Um,” Tobin and Rorke shared a confused glance. “No?”

“I must have escaped somehow. Hmm. You have my thanks for waking me,” the wyrm rumbled. “And I will let you live another day.” Without further hesitation it turned and swept quickly into the lake, leaving only fading ripples where it had once been.