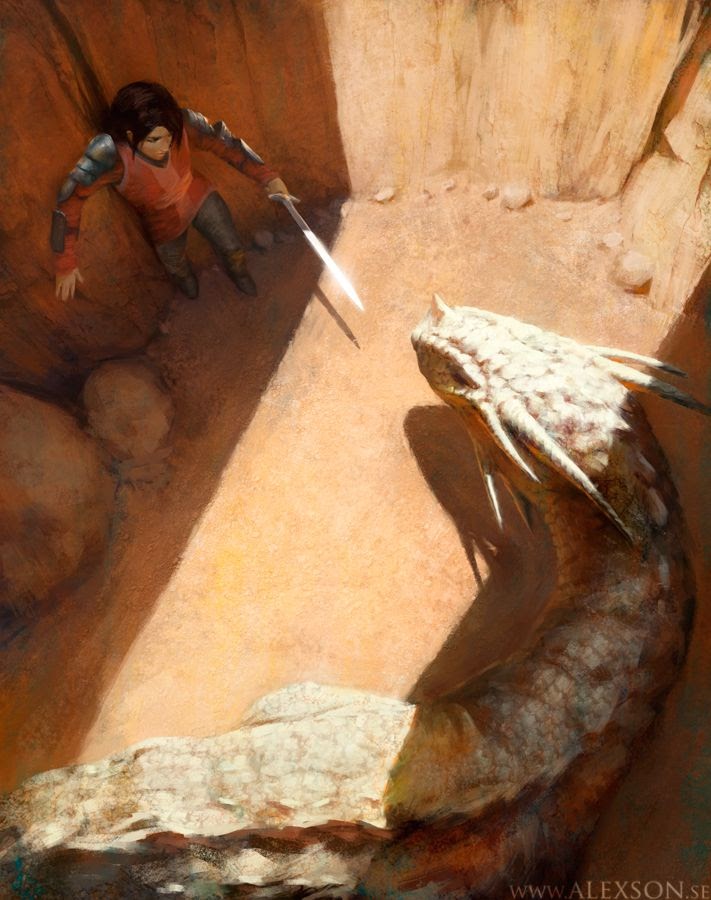 Dragon lairs were notoriously hard to get to. Mostly they nested in the mountains, but every once in a while they’d choose to take over the remains of an abandoned castle or an island in the middle of a lake somewhere. The one Cara was after had chosen, by all the signs she could find, to settle into a series of maze-like canyons the locals called Garth’s Folley. She had no idea who Garth was or why the canyons were named after him, and she honestly hadn’t cared enough to delve into it. All that mattered was she’d found her dragon.

Finding it was, of course, the easy part. Those dragon hunters that lived long enough to develop a strategy usually preferred a slow, careful approach. The longer you stayed hidden, the closer you could get, the better your odds. Rushing in with sword drawn and hollering a battle cry was a sure way to crispy, crunchy death. So it was with some trepidation that Cara simply walked into Garth’s Folley with little preparation and no real plan.

Oh, she wasn’t completely unprepared. She had armor… sort of. Second hand shoulder pauldrons, a beaten up breastplate under a threadbare tabard, and there were a few square pieces of metal that might generously be called bracers strapped to her forearms. Her leather pants were more suited to travel by horseback than combat, but she told herself it would be better than simple cloth. She did have a sword, though it hadn’t come with a shield. In hindsight, a shield seemed rather important when it came to facing down fire breathing dragons. Well, live and learn. Hopefully.

Most importantly, the dragon she’d tracked down was a young one. She hoped its relative inexperience in eating dragon hunters would give her the opportunity she needed. Otherwise… she tried not to dwell on whether it would be crunchy or crispy, because neither sounded particularly appealing.

Cara had been wandering the canyon for almost three days, and was starting to worry she hadn’t brought enough food, when she first caught sight of her quarry. At first it was a shadow moving across the canyon floor, something she mistook as a cloud moving across the sun. But clouds didn’t let out bowl clenching shrieks like the one that came a second later. Startled, she turned her gaze skyward.

Up above the great winged beast lazily circled overhead, giving Cara the impression of a hawk with its eye on a field mouse. The mouse, of course, was probably her. She pushed back against the rough rock of the canyon wall, hoping it hadn’t seen her after all. If it decided to swoop down on her there wouldn’t be any chance of self defense.

Luckily it either hadn’t seen her, or had its eye on a different mouse, for when it tucked its wings and dove it disappeared into another part of the canyon. She saw it several times after that, always in the sky, and from those brief glimpses she guessed at what must be the direction of its lair.

Even then, finding her way towards it through the labyrinth of rock was a difficult task. At last, with food dangerously low, she found signs that she was on the right track. First was a bone from an animal she couldn’t place, cracked and pitted with teeth marks. The further she went the more bones there were, scattered carelessly across the canyon floor, occasionally in small piles. More telling were the scales. She’d heard about how dragons molted, and knew good condition scales could sell for a nice price in some places.

But now wasn’t the time for treasure hunting. The real prize was close. If this was where the dragon ate, where it kept its hoard would be close by. And if the dragon was home it would be with its hoard.

Creeping slowly through the bones she heard a deep, rumbling snort, and froze in her tracks. It had come from a turn in the canyon just up ahead. It was here, just like she wanted. Brandishing the sword in front of her, Cara swallowed hard and continued on, using the sound of what she now believed to the dragon’s snores to mask her footsteps. She took one more steadying breath, clenched her teeth, and turned the corner to see… nothing.

No dragon. No hoard, even. The canyon simply ended in a dusty, empty dead end. And yet the sound had definitely come from here, she was sure of it. She walked further in, curiously looking around for somewhere the dragon could be hiding. A hidden cave entrance maybe, or… or maybe this was a trap. The realization hit her like a punch in the gut. The dragon noises had stopped. If it had been here – she looked up to the sky, wondering if it was above her, waiting to pounce.

“Shit,” she breathed. “Where are you? You had to have gone somewhere!”

“Looking for me?” A low, thickly accented voice rumbled from behind her.

Cara spun to face the dragon, sword raised in a token gesture of defense. How had it gotten behind her, and without making a noise? “Oh,” she croaked weakly, “Hello…”

It stalked slowly forward, a menacing growl issuing from the back of its throat. She retreated until there was nowhere left to go, and pressed her back into the wall. This wasn’t how things were supposed to go. Not at all. The dragon’s nose was almost close enough to touch the tip of her sword. It was not impressed. Not at all. But she wasn’t dead yet, and that gave her an opportunity.

“Good thing,” the dragon snorted, blowing a gust of hot, fetid breath across her face. “You wouldn’t have succeeded at either. So why are you here, soft one? I’ve been watching you for days as you wandered these canyons. You’re no warrior. You don’t even have a shield. I’ve eaten better warriors than you with one eye closed.”

“Right, I knew I should have gotten a shield. I mean, um…” Cara looked at her sword, then back at the dragon. She only had one chance to get this right. She dropped the sword and tried to stand up straight. “I need your help.”

This, at least, seemed to take the dragon by surprise. “Oh?” it drolled. “How unusual. What could I possibly help you with?”

“Well,” Cara took a breath and made a squinting, sheepish face. “I need you to kidnap a princess…”

The dragon was silent for several seconds. Cara began to worry it would just eat her anyway, but eventually it settled onto its belly on the floor, legs folded underneath, and snapped those terrifying teeth together several times. “How wonderfully cliche,” it said, snapping teeth again. Cara began to suspect this was the dragon version of a laugh. “Why?” it asked.

So she laid it all out. How she had been hired as a tutor to teach the king’s daughter. How they’d fallen in love, how the king had found out and banished her, and how the princess had become betrothed to the prince of another land.

“If we ran,” Cara explained, “The king would know. He’d come after us, chase us to the end of the world to get his daughter back. And to punish me. But if she were taken by a dragon…”

“Ah,” the dragon nodded. “He would think she’d been eaten, or whatever it is dragons are supposed to do with kidnapped princesses.”

“Right,” Cara agreed. “At the very least he wouldn’t think to come after us. I know dragons don’t usually help people… but will you? If you told me what you hoard, I’m sure I could find something to pay you with.”

“Do you know why dragons never help anyone?” it asked, slitted yellow eyes narrowed. “It’s because no one ever asks. And this… this is so wonderfully out of the ordinary I’ll do it for free. Tell me more about this princess of yours…”