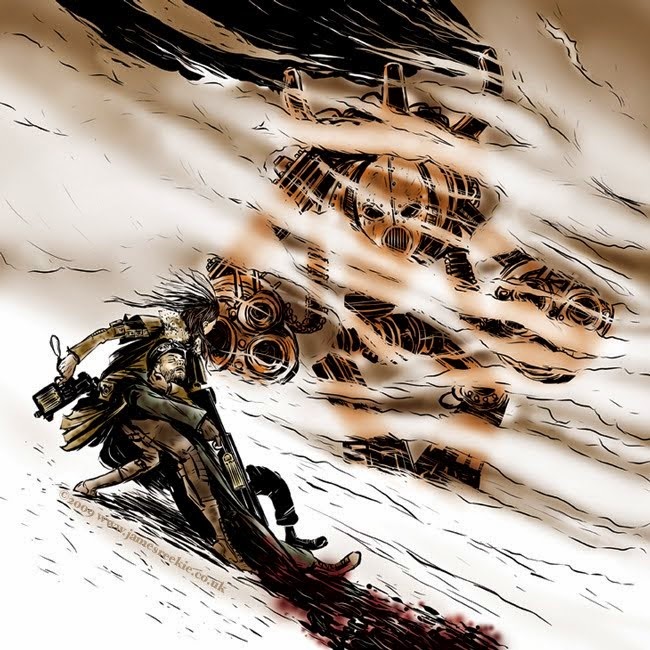 In the good old days war tended to stop in the winter. Nobody liked dying in the cold and snow, especially when it was the elements that were killing you and instead of the enemy. These days, when trains could carry troops and supplies alike, it was a year round proposition. It was a much slower, more carefully considered proposition, and the people on the front lines still didn’t like it, but it was doable.

Today Cody was lucky enough to be headed away from the front lines. Unfortunately that didn’t mean he was headed away from the war. Instead he was just headed to a quieter part of it – Fort Piston. Piston was as close to secret as the Union could make it, nestled in the middle of mountainous nowhere and connected to the outside world by one lonely stretch of train tracks. Among those few who knew about Fort Piston, even fewer knew what actually went on there.

Cody and his men were about to have the dubious honor of finding out. They’d been on the train for nearly a week, slowly winding its way through the Rocky Mountains. Many of them were getting bored and restless, but Cody himself was enjoying the break. He sat in the dining car with Garrett, one of the technical personnel being transported to the fort.

“A lot of the men are on loan from the First Nation Army,” Cody was explaining. “They’re not actually Union soldiers, so they’re free to dress how they like. Unofficially that extends to all of us. Not much sense wearing a uniform when you’re crawling around behind Confederate lines, eh?”

“Alright,” Cody sat back. “My turn. What’s up with the extra security? You don’t usually have the Special Irregulars ride this train back and forth. What’s so special about it this time?”

“You seen all those big boxes in the freight car?”

“Well,” Garrett leaned forward conspiratorially, “There’s a whole Ironclad in those boxes, in bits and pieces. We’re gonna put it all together at Piston and test it out. If it works like we hope the greybacks are in for a hell of a surprise come summer.”

There was a screech of brakes, and the entire car shifted. “The hell are we stopping for out here?” Cody wondered. A quick glance out the window told him the train was slowing down fast, not a single sign of civilization in sight.

“Might be rocks on the track,” Garrett suggested. “Or maybe an avalanche of snow.”

“Hmm,” Cody considered the possibility. “Could be. Excuse me, would you? I’m going to go have a look up front.”

He ran into Lone Hawk on the way to the locomotive. “Trouble?” the First Nation warrior asked.

Lone Hawk gave him a terse not. “Good thing I brought this,” he added, holding forth Cody’s rifle. “Should I get the others?”

“Not just yet. Let’s you and me go have a look up front.”

The snow was starting to pick up as they reached the engineer, heavy wet flakes driven by wind that threatened to turn into a righteous blizzard. A tight faced man in overalls was carefully wrapping a few pieces of dynamite together with string. He glanced up when they entered and shook his head to preempt their questions.

“Got a load of shit on the tracks ahead,” he told them. He spared a hand to tap the binoculars that hung around his neck. “Nothing a little bit of TNT can’t handle. Blow most of it away – mind the tracks – then slowly push ahead and let the plow do the rest. Done it before. Nothing to get worried over.”

“Not too long at all. You boys stay here and mind the engine for me if you like, I’ll be back in a bit.” He grabbed a heavy fur coat from one corner, tucked the dynamite under his arm, and clambered out of the cab into the snow.

“Maybe not trouble after all,” Lone Hawk commented. A minute later the crack of gunfire pierced the drifting snow.

A hail of bullets interrupted him, peppering the cab and engine. Seconds later gunfire issued forth from the passenger cars in response – the Special Irregulars, doing their job.

“This ain’t right,” Cody muttered. “We’re too close to Piston for a Confederate ambush.”

“Yet here they are,” Lone Hawk observed, peering carefully out a window. “Definitely greybacks.”

A heavy wud-wud-wud rose above the crackle of small arms fire. Starting from the furthest car back and slowly walking forward towards the engine, the wood and metal sides of the train began to splinter violently, as if they were being hit by small cannon balls rather than bullets. Cody’s eyes went wide. “Ironclad!” he shouted. “Move!”

Without hesitation he and Lone Hawk turned and jumped from the cab, putting the train between themselves and the Ironclad. The cab erupted into shrapnel as they leapt, and as they hit the snow the locomotive itself tore apart in a conflagration of steam and fire.

Cody tried to stand, but his legs wouldn’t obey. Lone Hawk grabbed him around the shoulders and started dragging him away up the side of the mountain. He noted, in a detached sort of way, that there was an awful lot of blood in the snow where he’d landed.

“Only a flesh wound,” the brave told him. There was a muted thump nearby, like a pile of wet snow falling off a roof, and Lone Hawk stopped pulling him. Cody rolled his head to one side and saw another Ironclad approaching through the blowing snow, coming right at them.

Without a word Lone Hawk dropped him in the snow and ran. Over the blowing snow, Cody heard a heavy wud-wud-wud.