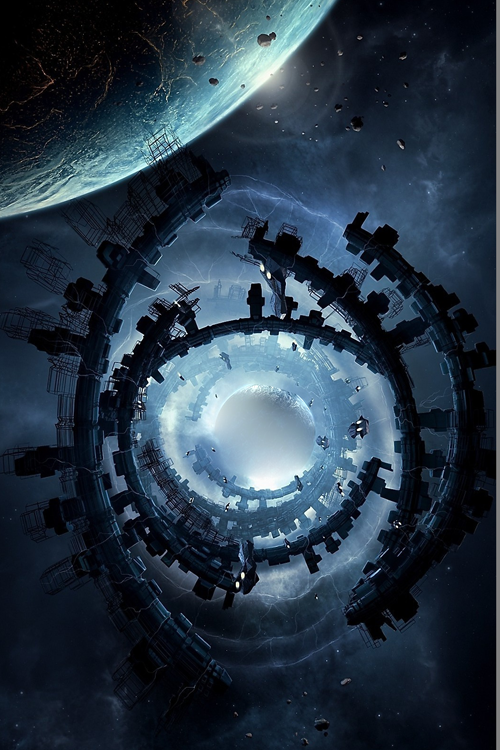 Sol Gate Control to transport Calypso, you’ve been granted access to the wormhole. Proceed to marker one five three and hold position. We’ve got a Worm coming through and you don’t want to be in the way. Once she’s through you’re number three in the queue.

Tack flipped the transmit switch on his control board. “Roger that, Gate Control. Proceeding to one five three and holding position. Hey Control, where’s that Worm headed?”

Wild space, just like always. I hear they’re trying to put another arm off the Baldur gate, like the place isn’t busy enough already.

“Never enough room in the galaxy, is there?”

Ain’t that the truth. She’s headed through in a couple minutes. You should be able to get a visual on the gate from your marker. Enjoy the show.

Tack’s fingers danced over his control board, dialing in a magnified visual of the Sol Gate. A massive ship was lumbering towards it at an almost painfully slow speed. He could understand why they’d want to be cautious, of course.

Terminus Ships, or Worms as they were colloquially known, were some of the biggest vessels ever made. Inside their massive frames they carried the equipment needed to create an artificial wormhole terminus and all the basic pieces of a gate with which to stabilize it. Despite hundreds of years of research nothing smaller was capable of such a feat, and all that mass didn’t exactly turn on a dime.

For as long as it took the Worm to get to the gate it was worth the show. Wormholes, once connected from one terminus to another, were always there. They were always open, tunneled through spacetime, just waiting for someone to go through. But the termeni themselves were invisible, at least to the naked eye, until a ship went through. Then something magical happened.

It was happening to the Worm right now. What had once been dark empty space in and around the gate began to glow with a soft blue light. Tendrils of what looked very much like lightening spiraled out from the center, forming what would look like a tunnel from the perspective of the Worm. As it crossed the threshold of the terminus the colossal ship seemed to stretch, elongating as if it were made of putty. He saw the front end pull all the way through the gate while the rear seemed to stay in place.

In the blink of an eye the ship’s aft rushed towards the front, like a taught spring released, and the behemoth disappeared in a flash of light.

It was the Calypso’s turn soon enough. Andy, Tack’s copilot, came up to the cockpit for the jump. He got the green light on his board and fired the engines. The gate began to luminesce before them. It took a moment for Tack to realize something was wrong. He checked his instruments. Sure enough, they were too far away for it to be lighting up yet.

Andy saw it too. “Control, this Calypso. We’re reading an early activation of the terminus. Something we should know?”

We see it too, Calypso. All the other gates confirm that no ships have entered the wormhole, and we’re not getting any IFF or transponder pings on our instruments. You’re clear to proceed. But, ah, be careful.

A proximity sensor alarm went off. A huge, ragged chunk of warped metal appeared from the terminus. Tack pushed hard on the controls. The metal sailed past, barely missing them… and then they snapped forward into the wormhole. More chunks of metal swept towards them, illuminated like lightning rods by the tendrils of energy that lashed out to strike them from the sides of the wormhole.

“What the hell?!” Andy demanded of no one in particular. “Look out!”

The source of the debris swept into view. It was clearly the forward section of a ship, and larger than the Calypso all on its own. “Is that a Worm?” Tack wondered aloud as he navigated around it.

“Definitely not. Look,” Any opened a sub window on their visuals and enlarged a portion of the wreckage as it sailed past. “That’s not any language I know.”

They didn’t have time to consider it further. “Coming up on terminus exit,” Tack announced. There was another flash of light, and they were back in normal spacetime.

“Well, shit.” Andy drew out the words. “This isn’t Andromeda.”

“Sure as hell isn’t,” Tack confirmed. He wasn’t getting any IFF or transponder signals, not even from the gate, yet his panel was alight with sensor contacts. They were all behind the Calypso, so he fired the thrusters and spun the ship in a flat circle. The view that came around was not at all what he expected.

Every wormhole gate he’d ever seen had one ring. The one he saw before him had at least five, maybe more, and it looked to be in orbit of a planet. Nobody put wormhole gates near planets. Definitely not five of them. That was just insane.

“It’s theoretically possible for a wormhole terminus to jump from one location to another. That’s why we use gates, so they don’t drift. I think… I think the Andromeda terminus jumped. No,” he peered at the five ringed gate. “Not just jumped. I think it got hijacked.”

“You saying these guys stole a wormhole?” Tack was astounded. “Why would they do that?”

“I don’t think it was on purpose. If you do something on purpose you make sure you don’t cut your own ships in half.” Andy tapped at his board, and a magnified subwindow appeared. There, near the gate, was the rest of the ship they’d seen inside the wormhole.

Another thought occurred to Tack. In all their exploration humanity had never encountered another species. “What a way to make first contact,” he muttered.