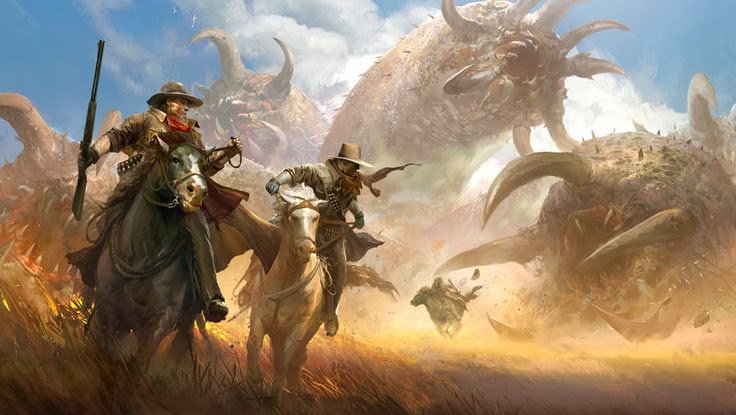 The open plains were a difficult place to track a fugitive on the run. Even more difficult when that fugitive was a known spirit talker, able to sway the plains into concealing all trace of his passing. All trace, that is, aside from the bodies of his victims. Gordon Marrow had gotten sloppy, and now there was a posse on his tail. Were it anyone else Gordon would have been able to lose them, as he’d lost so many others before. But these men were Hunters, that special branch of the US Marshals, and they had a spirit talker of their own. If they caught him he’d be hanged, or worse. Probably worse – Hunters weren’t known for letting their quarry come back again. So, with the clock running out, he rode into the town of Lee’s Hollow with grim determination and one last ditch plan.

Marshal Byron Steel leaned forward in his saddle and casually adjusted the brim of his hat. “What’ve we got, Wolf?”

James “Wolf” Pierce knelt next to his horse, eyes closed. He was a lean and grizzled tracker whose skin was dark and worn from years in the unforgiving sun of the plains. Some said the only way they could tell him from the natives was his face full of wiry black hair. The beard that grew from just below his eyeballs all the day down his neck was one reason for his nickname. The other was the unerring, methodical way way in which he tracked his prey.

Wolf opened his eyes and stood, brushing dirt from his pants. “Spirits say he took a turn northeast. There’s a town a day or so that way.”

There was a rustle of paper as Marshal Danny Fitzpatrick consulted a stained and worn map. “Aye,” he nodded as his horse slowly walked a circle around the others. “Lee’s Hollow, according to this. Never been there myself. Think Marrow knows we’re after him?”

Steel sat up straighter and looked to the northeast. “He’s running too hard and fast for a man who thinks he’s in the clear. He knows.”

“So what do you figure he’s up to?” Fitzpatrick asked as Wolf hauled himself back into the saddle. “He’s passed by the last two towns.”

“Hmm,” Steel frowned. If Marrow had an itch to scratch it wouldn’t be the one most men had. His would mean blood. “A day away?” he prompted Fitzpatrick.

From a distance Lee’s Hollow looked like any other dusty plains town. There was a handful of buildings all clustered together, private residences along with all the requisites for town life like a general store, church, and a saloon. It likely served as the hub for a number of nearby ranches, any of which Marrow could be holed up in.

“Something about this place seem… off, to you?” Fitzpatrick asked ask they closed in on it.

Wolf pulled his horse to a stop. The other Marshals pulled up next to him, waiting for an explanation. “Danny is right,” the spirit talker told them, his eyes squinted at the town. “Something is wrong here. I can feel it.”

“What kind of wrong?” Steel asked. “Did our boy Marrow learn some new tricks?”

“Evil waits in that town,” Wolf asserted. “More than Gordon Marrow brought with him.”

“Is that right?” Fitzpatrick pulled his rifle from its saddle holster and checked to make sure it was loaded. “Well then, why don’t we go clean it up a bit, eh lads?”

They advanced slowly with rifles ready and eyes keen for trouble. The town was as they first surmised – a ghost town, seemingly empty of residents. No one moved on the street. No music played from the saloon. No shadowed figures watched from behind curtained windows. At the very least the local lawman should have been out to greet three armed newcomers, yet he too was absent.

“Search the place,” Steel ordered. They found the church locked from the inside, the unmistakable smell of death escaping through cracks in the frame. Fitzpatrick kicked in the door and the Marshals rushed through to find a macabre scene.

Dead townsfolk hung from the walls and the rafters. The pews had all been pushed aside so that more bodies could be laid flat on the ground. In the middle of it all sat a blood covered Gordon Marrow, naked from the waist up. Strange symbols had been carved into his flesh, and that wasn’t all that was wrong about him. He seemed swollen, like a dead man that had sat out in the sun too long.

Steel advanced on Marrow slowly, rifle pointed at the fugitive’s forehead. “What the hell did you do here, Marrow? What is this?”

“I thought…” Marrow shuddered. “I thought I could bargain with him. I shoulda… shoulda known. Make a deal with the devil, there ain’t no way that ends good. Just lookit me now.”

“Steel,” Wolf warned, “Look. Other bodies… they’re swelling up like him.”

With a cry of anguish, Marrow’s flesh split open. He shed his skin like a snake, and from within him came a large, worm like creature that had one central mouth ringed with curved teeth. The other bodies split open as well, producing five demon worms in all. The Marshals opened fire, but the worms just kept growing. They burst through the walls of the church as the Marshals retreated down the street and hastily mounted their horses.

“What do we do?” Fitzpatrick asked as the demon worms towered ever larger behind them.

“We go get the army,” Steel told him. “And hope they’ve got guns big enough for the job.”

The horses needed no urging and soon the three Marshals were thundering across the plains, monstrously huge worms close behind.