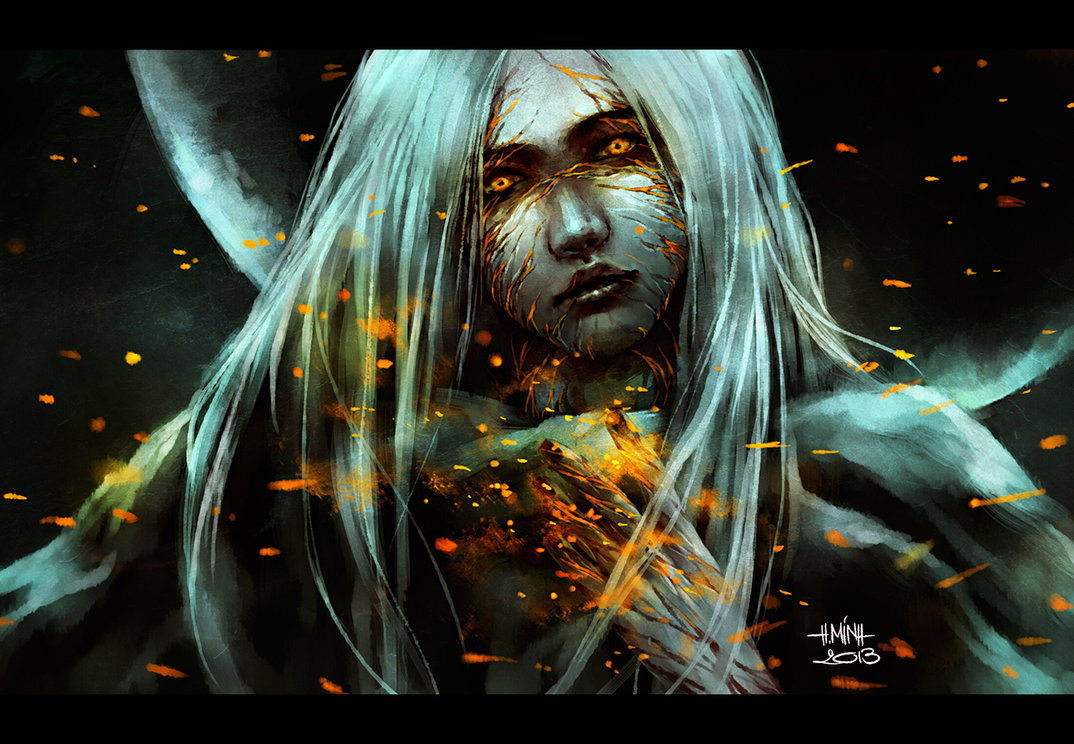 Beneath The Waves by Nanfe

Natsuko loomed over me as I lay defeated on the ground, a pale moon large and full behind her. Orange embers blew past on the wind, remnants of the burning town and – I felt sick at the thought – my former comrades. The same winds that lifted their charred remains teased Natsuko’s long white hair and pulled pieces of her own skin away, as if her fingers were smouldering stubs of tree branches right after a forest fire. She waved her hand over me, embers flying from her fingers like swarms of fireflies in the night.

She was toying with me. By rights I should have been dead, along with my fellows. Instead she’d kept me alive. I looked past her hand, up into wide eyes that were aglow with unnatural light. Cracks spread from them, marring her once pristine skin. Now it was the pale alabaster of death, split by ragged tears through which shone with the same fiery light as her eyes. It was as if a monster made of flame were wearing her as a mask. Perhaps, I thought, that wasn’t far from the truth.

“Haru,” she spoke my name with a hint of the fondness we’d once known for each other. “You came for me.”

I could not bring myself to lie. Not to her, not even now. “Yes, Natsuko. I came for you.”

“You came with them,” she accused. The last word was a coldly delivered reference to the dead the littered the field. I used it as an excuse to look to one side, out at the bodies that smoked in the moonlight. My blade was nearby. Maybe if I could roll away fast enough, I could get a hand on it… but no. I would be dead before I could ever bring it to bear.

“Yes,” I looked up at her again, still so beautiful despite the monster she’d become.

“Why?” she asked, as if the answer mattered.

“Oh, Haru,” her voice softened though her expression remained fixed and void of emotion. The hand she’d been waving above me lowered. It’s flame died back enough for her to brush at the chaotic web of hair that stuck to my forehead. I could smell the hair burning even as my skin felt sunburned, but the unexpected gesture did not go unnoted. “I deserved so much more from you,” she continued, pulling her hand back. “Where were you when they accused me of blood magic? Where were you when they imprisoned me naked, beat and starved a confession from me? They burned me, Haru. They burned me!”

At last some expression passed through the vapid mask she wore, twisting her features in rage. I lowered my head. “I tried, Natsuko. I spoke up for you, said you would never do such things. I tried to have you released into my care, promised I would watch over you. I did all I could.” But even to my own years, the words were a lie. I could have done more. I could have rescued her, even if it meant my own condemnation. “And yet,” I looked up at her again. “Here you are, even after being burned. It was true, wasn’t it? Everything they accused you of, it was true.”

“And what if it was?” Natsuko demanded. “I was content to carry out my experiments in peace, hurting no one… loving you. Do you think I would choose this?”

“I chose to live, Haru. With what knowledge I had I called on the spirits in my moment of greatest need, and they answered!” She swept her arms wide and sent a fresh burst of hot embers into the wind. “They offered me a way out, and in my desperation I accepted.”

“And then you killed them all,” I reminded her.

She looked at me with those strange, emotionless eyes, and tilted her head gently to one side. “I dispensed justice. I brought divine judgement down upon them, and did to them what they did to me.”

“And the village after that?” I asked. “And the one after that? When does your justice stop, Natsuko?”

She looked up into the night sky, then. For a moment I dared hope my words had reached her, but a moment later she whispered, “Never.” She looked back down at me, still prone upon the ground, and took a step backward. “It will never end, Haru. Not even after every last village is ash, the last castle ruined, and the last man naught but charred bone. That was the bargain I accepted.”

With a groan I pushed myself up from the ground. As I gained my feet I expected to be struck down at any moment, but Natsuko let me stand. I hobbled over to my blade and picked it up, raising it in one hand as the other hung limply by my side. I turned to face her. “It will end sooner or later,” I told her. “You can stand against ten men, or fifty, or a hundred. But what about thousands? Tens of thousands? What about the Emperor’s sorcerers? You can’t stand against them all, Natsuko.”

In answer, she slowly raised one hand. All around me, dead men began to rouse. Unnatural fire began to glow within them, shining through dead eyes and ragged wounds. “I won’t stand alone,” she said darkly. “And because I love you still, Haru, I give you the choice… stand with me as you are, or stand with me as they do. There is no other option. Which do you choose?”