Short Fiction: The King Is Dead 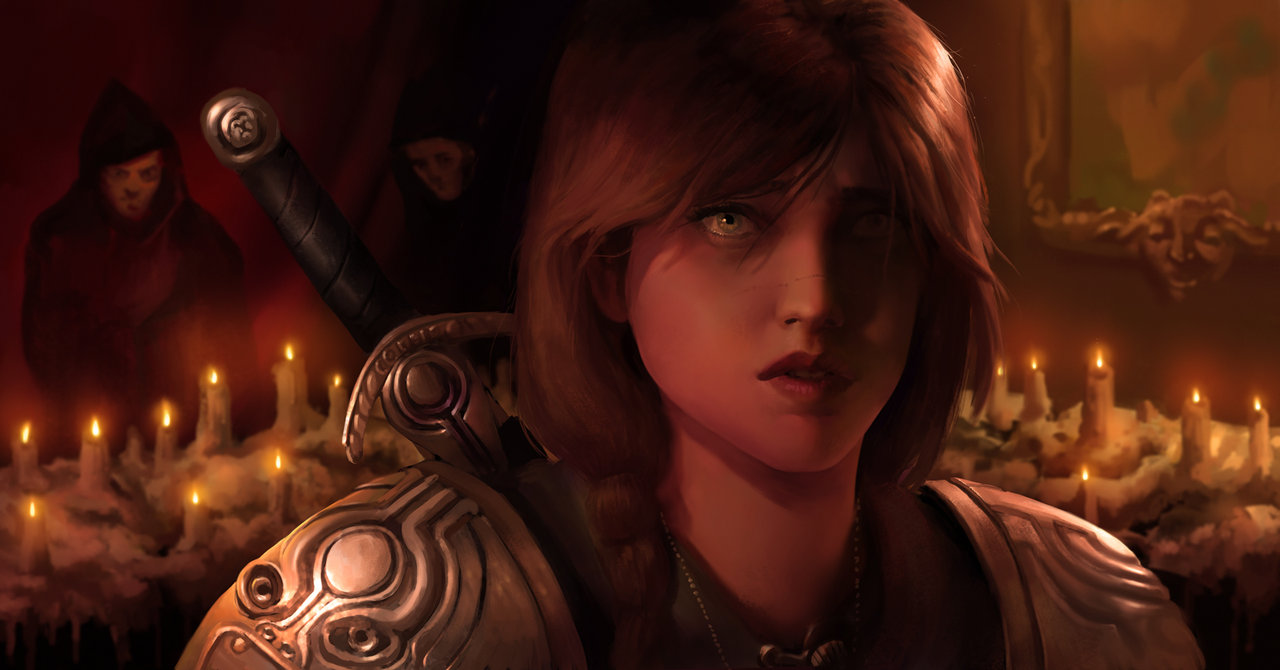 The King Is Dead by Mike Azevedo

The room stank of tallow candles mixed with a pungent incense, no doubt meant to cover the smell of the candles. Karina wrinkled her nose and tried to breathe through her mouth as she entered. Her eyes swept across the hooded figures gathered there, pausing to glare at each one in turn. Why her father felt the need to keep these mystics and charlatans in his inner circle she would never understand. But he was the King, and thus free to indulge his eccentricities. There seemed to be ever more of them these days, if the rumors were anything to judge by. She wouldn’t know, of course. Not these days. She’d been out in the field leading her father’s troops against the Farrow in the east.

Looking back, it should have been her first clue that something was wrong. She’d pestered her father for years to let her take a more active role in the kingdom’s military affairs, preferably by leading men against their enemies. He’d rebuffed her time and again, claiming not that it was unladylike, but that as his only child he dared not put her in harm’s way. That changed when she started questioning his choice in advisors, their strange rituals, and demanding to know their secret business. Suddenly her request was granted, and she was sent out into the field. She’d taken well to the task, earning the respect of her troops and enemies alike. She’d even gained a souvenir to remember it by – a scar across the bridge of her nose. Not too large, but definitely visible.

Perhaps she’d been too involved. Wanting to show her father he hadn’t made the wrong decision, wanting to make him proud, she’d thrown herself into it with everything she had. Maybe that was why she hadn’t noticed his letters getting more rambling and unfocused, his handwriting beginning to waver. Why she’d ignored the fact that by the end they were arriving fewer and farther between. She’d had time to think about all that on the way back.

The order to return had come suddenly, with no forewarning, during the endgame of the Farrow campaign. It hadn’t even been her father to write the letter, but his chief advisor Marcellus. She’d started worrying, then. She worried that he was ill, maybe dying. The trip back from the front had been shockingly educational. Returning to civilization she found the citizens spoke of her father, their king, as if he were something from a fairytale. They spoke of his strange appetites, told stories of people who went to the king’s castle never to return, whispered of arcane magics practiced by his inner circle. Some doubted he was still sane, clearly not realizing they spoke within earshot of their ruler’s own daughter.

So here she was, home again, and her father hadn’t even met her at the gates. “This had better be good, Marcellus,” she warned her father’s advisor.

“Ah, yes,” the cloaked mystic shuffled forward with a conciliatory gesture. “I realize your military campaign is in a sensitive stage. I apologize for tearing you away at such a time.”

Karina stared at him. He thought she cared more for her campaign than for her father? That she was upset about coming home, rather than concerned by her father’s absence?

Another of the advisors spoke, “We waited as long as we could, hoping your campaign would conclude. But we could wait no longer.”

“Nor can I,” Karina told them flatly. “I came here to see my father. Where is he?”

They exchanged glances. “How to put this delicately,” Marcellus murmured, as if to himself. “My lady, your father is… no longer fit to rule.”

Anger flared within her. “How dare you,” she snarled. “Who are you to pass judgement on my father’s ability to rule?”

“We’re in a better position to judge than you,” another robed advisor told her.

“Tolmey,” Marcellus warned him sternly, but the jab had already hit home. Karina ground her teeth, but couldn’t deny the truth of it.

“I will see my father,” she insisted.

“You cannot,” Marcellus told her softly. “It is unwise,” he added quickly. “He is… not himself.”

“What game is this?” she took them all in with a glance. “You say he is unfit to rule, and I should take your word for it? You say I should not see him, why? To spare my feelings? Would you depose him and have the gall to ask for my support? Do you intend to bribe me with my own birthright, to make me queen?”

“I told you this would end poorly,” a unseen advisor sighed.

“And so it has,” she snapped. With one quick motion she whirled and made to storm out of the room. “I’ll find my father if I have to break down every door in the castle,” she threatened.

“My lady, wait,” Marcellus implored her. “The reason you cannot see your father, the reason he is unfit to rule, is… my lady, your father is dead. The king is dead.”

The shock of the announcement froze her in her tracks. It shouldn’t have been unexpected. She’d thought about the possibility on her way back. But to hear it uttered, to hear her fear confirmed? She felt tears welling up in her eyes and made no move to wipe them away.

At last she turned back to them. “Dead?” she repeated, blinking out the tears that blurred her vision. They ran down her cheek unchecked. “Yet you spoke as if he lived. That he was not himself. Why the riddles? Why not tell me outright?”

Marcellus licked his lips in a nervous fashion and glanced at his fellow mystics, the dead king’s inner circle. “Because, my lady,” he spoke slowly. “The king is dead, yet he is not gone. He rules still, and that is why we called you back. There is… much we need to explain.”